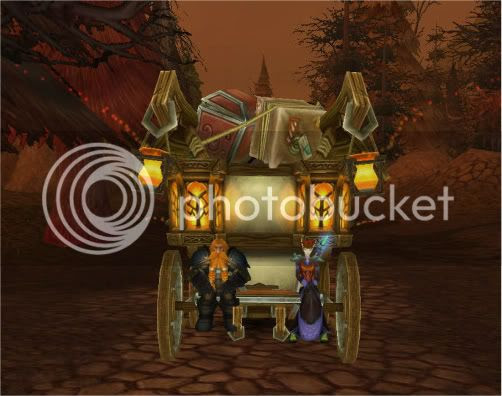 For the past couple of weeks I have been leveling a new disc priest on a new server and have until now leveled completely through dungeons (the exception being levels 1 through 15) and have thoroughly enjoyed my time spent playing disc from the ground up. That is, until I got put in a group for my characters first run of Razerfen Downs. For those of you not familiar with the dungeon there is an NPC Quest giver named  Baelnistraz who gives out an escort quest, this would be fine if the quest were sharable; however, since you must accept his quest and then exchange it for the escort quest it is an unsharable chain and a huge pain in the butt and it is safe to say that none of my characters have successfully completed this quest. It's just too irritating.

Now, I'm the first one to admit I'm trying to level this character quickly, so this afternoon I decided to pick up the quest - the first one - the one that starts the chain. Directly after that someone started the escort part. I'm pretty easy going so I shrugged it off and saw it as an opportunity to get a little more exp and maybe a few scraps of cloth. The feral druid (read: kitty druid) did not take it this way, and immediately starts demanding that the escort portion be shared with him. Of coarse the quest is a chain and cannot be shared.

I should also mention that in groups I am the token quiet one. I sit back and heal. I have little to no interest in socializing with groups that are not on my server who I will probably never encounter again.

So, in true "quiet one" style, I sat back and let the drama deal with itself and did not get involved. Or at least, I thought I didn't. About halfway through the escort encounter I found myself back in Brill, where I had just purchased my new undead ponies. Apparently my silence had made me guilty of starting the quest, when I didn't even have the quest to begin with.

I know that getting kicked wasn't my fault, they were upset at not being able to complete the quest and needed someone to blame and I was easy to pin that on. It just... well, it upset me. Other than this I cannot remember the last time I was kicked from a group, and I usually equate being kicked with being bad and it's painful to feel like you weren't good enough, even when you've done nothing wrong.

Rationally though despite however much I hope that group wiped after kicking me it wasn't really their fault that they kicked me either. Ultimately it was a design flaw that got me removed from that group. If the quest were able to be shared that druid never would have mistaken my silence for guilt, because it wouldn't have mattered who started the escort.

Also: when things go wrong, it is not always the healers fault.
Posted by Unknown at 02:15