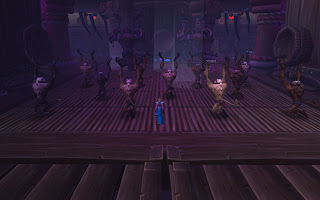 I've said it before, I was not super excited for Mists and the crux of it was really because of the state of priest healing in early Cataclysm. When Cataclysm hit Disc was in its prime and bubble-spam was in demand. In raid my character felt powerful, and competitive against other healers. Heroics... they were a joke if you had a decent group and if you had a good healer mistakes were survivable.

When Cata hit my powerful, awesome priest became what felt like a weak, useless waste of pixels. Forget raiding, I couldn't even do Cata heroics confidently. I understand that Blizzard was trying to reintroduce crowd control as a necessary factor in both group make-up and the thought process behind pulling as well as bring back the idea that mana is a limited resource and that one needed to think before healing. In theory, I'm actually ok with that model. The problem is, in practice the damage tanks took was still spiky and that priests took the nerf to mana efficiency and spell efficacy too hard. If my groups did not have enough crowd control to give the tank one mob at a time it was almost a guaranteed wipe, and if not my mana efficiency was so bad that I needed to stop for water every pull. If a dps pulled aggro, they died. End of story. I did not have enough mana or the time in between tank heals to heal a dps and keep the tank up. In the end I tabled my main, and leveled an enhancement shaman. Honestly, the dps queue time was worth the anguish I avoided.

Yes, through patches the healing game got better. My priest started raiding again, and is still the only one of my toons to have earned "Destroyer's End," but I spent the better part of a year hating my favourite toon and suffice to say I was not in the mood for another expansion to come along and potentially break my class again. I feel like a level 85 character, even if not the maximum level, should still feel powerful. I don't need the games I play to make me feel inadequate.

Now, I'm currently only level 88, classes and work severely limit my play time so I have no commentary on End Game content - raids or heroics, yet, but so far my leveling experience has been pleasant. I've really enjoyed the new leveling zones, both in content and the overall esthetic. I level as Disc because of Atonement, which keeps me healed while I smite things to death and because of the ease of transitioning from leveling via questing to healing dungeons.

I have really enjoyed the new dungeons, particularly the "Stormstout Brewery," once you kill Ook and the Hozen come out and start dancing. That's a riot. I feel like the level of difficulty for a potentially unskilled pug is just fine. Some mistakes will kill you, others just cost me mana. A hardcore group of friends or raiders will find likely them too easy, and that's fine. I feel like dungeons, and even heroics to some extent should cater to the causal audience anyway. My mana efficiency is pretty good. It's not unlimited, nor should it be. My heals are appropriately effective as well. Overall I don't feel overpowered, but I don't feel weak or under powered either.

From what I've experienced thus far I'm excited to see what Mists has to offer us as players, but will have a better idea on the state of priest healing once I too hit the level cap.
Posted by Unknown at 17:12