Not on topic, I know, but this is what's on my mind now and I'm feeling kind of like if I don't get it out it's not going to go away.

For those of you who don't know, I live in Atlantic Canada. Over the weekend,  we and much of the northeastern United States got hit my a massive Nor'easter aka Nemo.

Nemo hit my hometown shortly before 10pm on Friday evening, just before I left work for the night. I walk home from work, and it was snowing gently with little to no wind. It made for an altogether pleasant walk home. The mass of the storm was still in Boston, we were merely getting the tip of it. We knew that the worst of the storm would be over when it reached us, we just didn't really know what that meant yet.

In preparation we brought the extra blankets down from our loft, filled up our water jug, and I put my "Lion King" flashlight on the night stand. I wanted to be ready in case we lost power, and as a result, our heat. The cats hunkered down for the night in the bathroom - one on the bathmat and the other in the sink. When I went to sleep at about midnight the worst of the storm still had yet to reach us. 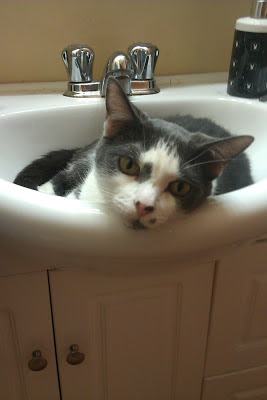 I remember that as a child I used to wait with giddy anticipation for storms. The worse the blizzard the better. Now, as an adult there is a certain dread that accompanies the snow instead. Questions come up "How am I going to get to work? Is it going to be safe for me to go to work? Are we going to have power/heat/water?" When I went to sleep on Friday night, I didn't know the answer to any of those questions. Not knowing is the worst part.

When I woke up I was relieved to find out our power had stayed on through the night, our heat was still running and despite being without water for a few hours due to a busted water main we had made it through the first half of the storm relatively unscathed. Cy shoveled a trench for me through our alleyway so that I could get out to the street for work and the snow had piled roughly to my knees at that point. Two hours later, when I left to see how bad it was the trench was half filled. At that point nothing had been plowed. My half of the street had drifts piled up to my waist and in some places taller than me. The other half was completely barren and windswept.

I walk to work, and ultimately I decided it was safer for me to stay inside than to risk getting run down by someone foolish enough to drive on un-plowed roads in the middle of a blizzard. 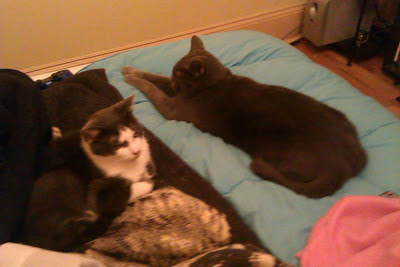 The best way to break up a wall of text? Add some cats.

I understand, that as an employee, the decision to go to work in inclement weather ultimately lies with me. I made the decision to stay at home, inside because the conditions outside were dangerous. I did it because I care more about my life than I do my job and I think I would have been a fool to make the walk down, especially after my roommate nearly got hit by an out of control driver two blocks down from us.  I do not provide a vital service. If our place of work were to close down for a day because a potentially record-breaking blizzard was bearing down on us, I think that would be ok. Many responsible employers made that decision and either closed their doors early or did not open them at all. The mall that my workplace is attached to closed. So did the liquor store across the street, along with the entire downtown area.

9/10 times I support having the employee make his/her own decision on whether it is work the risk to work through the storm. In this situation, I feel that an employer should recognize the danger in asking their employees to come to work. I feel that many employers did; however, once again my own left me and a lot of other employees feeling undervalued.

Overall, of those affected by Nemo we were by far among the lucky ones. We were safe, and warm in our home and my heart goes out to those more severely affected by it.
Posted by Unknown at 18:00