She Must be Insane Part 3 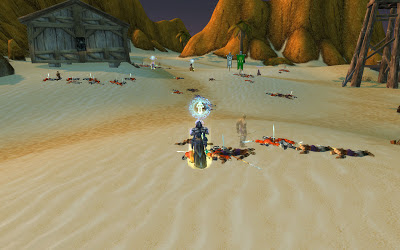 Two months in to my insane quest and I finally have real progress to report.

Starre and I had been planning to do some of the pirate grind together and finally after weeks of trying to meet up we finally set a date and time that we both managed to show up for. Let's just say we both forgot a couple of times.

Anyway, it seems that we picked the perfect night to grind rep because we stumbled on a farming group who invited us to go along with them, and after about two hours I managed to go from Hated with Gadgetzan all the way to Neutral. Without further ado here are this months final numbers:

It finally looks like I'm beginning to make headway with these reputations. I look forward to making it back into the green with Gadgetzan this month. Also: I can finally use their flight point again! YAY!

In other news I also want to let everyone know that Cy and I have each started up Twitch accounts - he streams while he raids (1:30EST Tues - Fri), and I've just started so I don't really have a schedule set up yet. If anyone wants to check those out I'll throw the links up on the side bar and our banners on the bottom of this post.

Email ThisBlogThis!Share to TwitterShare to FacebookShare to Pinterest
Labels: She must be insane