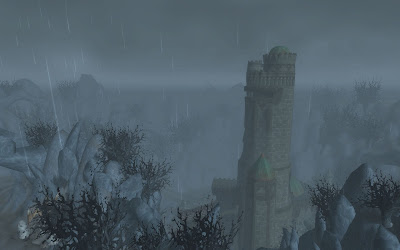 I just wanted to pop in briefly and acknowledge that I have not been around for the last little bit. Everything is ok, well it's all getting back to ok. School has been ferocious lately and I fear it will be worse in the coming weeks.

Fear not, my regular nonsense will return, when I get a spare moment (read: Easter Weekend)
Posted by Unknown at 20:35 No comments: 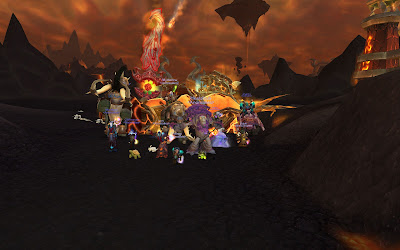 Could not find a picture from my raiding days... borrowed one of Cy's


This started as a response to Navimie's post "When both sides of the story are right" and sort of took on a life of its own, so rather than clutter up her post with all of my opinions and experiences I decided to move it in here.

To begin, I want to first let you know where I'm coming from. I am not a raid leader. I am not a guild leader. I am not actively involved in a guild at present. My opinions and experiences are not from a leadership perspective: I have never been a raid leader. I have never actively made these decisions and I do not envy those in a position to implement them. What I am is a former raider in a number of different guilds enough to consider myself fairly well educated on the impact that these types of decisions can have on the average raider and the effect they can have on a guild. My experiences are all from the view of someone who observed the implementation of these guild policies and had little no no say in the decision to implement them in the first place.

Through my raiding years I've run with many different raid leaders and guild groups and it's been my experience that they all have their own way of solving the overcrowding issue. While there is no "right" way to deal with it, there are ways which are "less wrong" than others and ultimately the measure of the solution is whether your raiders feel it is a fair solution and leaves the least amount of hurt feelings.

When you have a fair amount of players sitting standby, but not enough to justify increasing your single 10 man raid to 25 man perhaps the most desirable, or obvious option would be to set up a second raid team. Then you can get everyone currently sitting out raiding and no-one would have to be cut from the guild roster. In a perfect scenario you would then have 20 people all of whom show up regularly, and are participating in the raid content that they want to be in. The problem is that the ideal scenario never works out exactly the way you imagined.

Having been recruited to fill out the secondary teams for several guilds the problem I most often run into is that people consider the casual or second group to be a stepping stone or, for recruits, an interview before getting bumped up to a spot in the primary group. I've always found this problem in progression driven guilds who have two groups that are running progression content in which one group is doing significantly better than the other and as a result, a spot in one group becomes more desirable for progression minded players and breeds discontent among members who feel they deserve to be among the better performing team and ultimately results in a high turnover rate for the second group which causes its performance to suffer further. I feel like there are two ways to avoid this:

Clearly, 25 man raiding or splitting into two 10 man groups are not for every guild. Many guilds then need to implement a way to place people on reserve without causing friction between raid members and every guild leader and raid leader has their own way that they sit people out and not all methods are created equal.

It's hard to decide who sits out in a fair manner, and even then it's easy to read into being sat out.  Some of the methods I've experienced are:

What I think is ideal:

Like I mentioned, every guild has a way that they handle placing raiders on reserve and they work on an individual level - not every method is for every guild. Ultimately the method you employ should be based on the raiders in your guild and what works for you.

TL; DR Dealing with placing raid members on reserve is hard and the method for dealing with it that works is something that each guild needs to deal with on an individual level. Also, I've been in some pretty lame guilds.
Posted by Unknown at 17:35 2 comments: 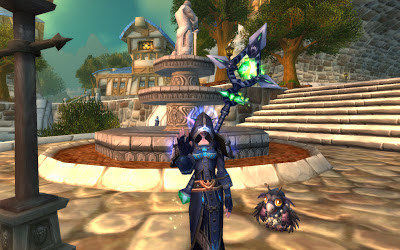 I can think of lots of these, so I've narrowed it down to my top 5 bad habits/flaws:

1. Procrastination - Why should I do something now, when I can do it later? I am horrible for putting things off and then rushing to finish them at the last minute, or rationalizing not doing them at all. I tend to do things when I feel like doing them, rather than when I should be doing them hence why I have never been able to stick to a proper exercise regimen because and why I have yet to finish a single reputation that requires dailies.

2. Keyboard movement - I'm primarily a healer. I use clique and grid so that I can "click to heal" and because of that I have trained myself that my mouse hand is for spells which leaves my left hand, the one on my keyboard, for movement. 90% of the time this is not a problem and when it comes down to it if I need to make a quick turn and run away I drop my healing and run away (Sindragosa's Blistering Cold comes to mind). I'm not sure if that on its own makes me a bad player, but it does make me a bad dps because I have had a lot of difficulty breaking my healer habits and learning to use my keyboard and key-bindings for dps and mouse for movement.

3. Defensive - I'm not good at taking criticism. Instead of taking things in stride, I get defensive. There's a right way to give me advice and a wrong way and a thin line in between them. Often, it ends with me walking away from conversations that get too confrontational. Ultimately it's played a part in me abandoning dungeons and quitting raid teams. Sometimes it's not about who's right and who's wrong. With me it's often about knowing when to drop something and letting me learn to do things on my own. For example: I have a "friend" who refuses to accept any opinion other than his own as having even a little bit of merit. This results in him pressing the issue with me when we have differing opinions and with me getting frustrated, and defensive and ultimately walking away from the conversation.

4. Competitive - I love recount. I love it. More than that, I love to have my name at the top. Sometimes this gets in the way of being a responsible, mana managing, good healer.

5. Obsessive compulsive - I like things done a certain way and some trivial little things left out of place bother me. Little things like leaving the bathroom light or a coffee cup on the table bother me. I have a particular way that I fold laundry. In WoW this manifests itself when people break etiquette or do fights in a new different way. 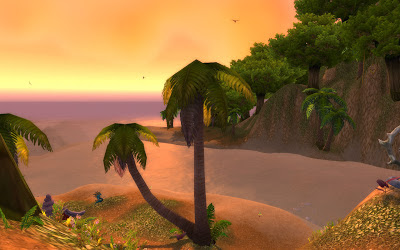 I've decided to group these two together because the first only requires a link.

Here it is : Link

You'll notice that is is from April of last year because that's actually when I made the blog. I did a couple of posts and then lost interest until September, when I decided to stick around.

Wow, lots. For a selection of my favourite blogs I would invite you to check out the blogroll to the right. I'm not really going to go into a lot of depth n them because they're all right there.

Blog Azeroth - This is my go to blog resource site. I really like doing the weekly shared topics and it's how I met most of my blog friends.

Warcraft Pets - When I need information on battle pets, I go here first. I'm mostly interested in capturing new pets than in battling pets and they have some really great tools to help me find out which pets I still need and how I get my hands on them.

Noxxic - Noxxic provides "class guides" which I find helpful if I'm not sure which talent I might want to take or which gems I need. They also give suggestions on "rotation" or "spell priority" which  I find really helpful when I'm playing a new spec or class.

How to Priest - As a priest resource it's hard to beat How to Priest. I'm not a very active poster, but there is a wealth of information and if I have a priest problem, I go there to solve it.

Wowhead - My favourite WoW Database. Every quest, item, NPC, and more catalogued and waiting for you to search it.

The Daily Squee - Daily dose of cute.
Posted by Unknown at 23:11 No comments: 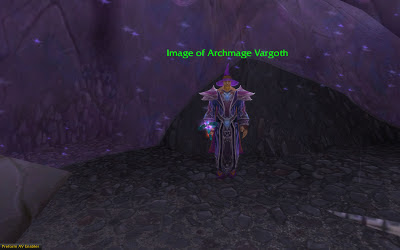 ...and he's got daily quests for you.

That's right, while everyone else is excited and getting into the new daily quest hub and raid content etc. I am excited because in a blast from the past Image of Archmage Vargoth is back as a daily quest giver. Whoo!
Posted by Unknown at 00:00 No comments: 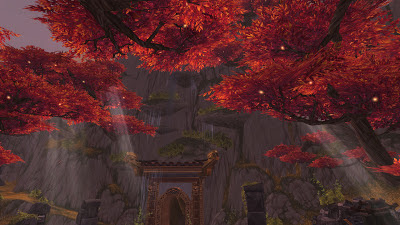 I just want to say, before you read this, that I've been reconsidering posting it for a while, because some of these feel like confessions and are not things I'm sure I want people to know about me. You have to understand that I am a particularly private person, and it's hard for me to put things out there that are "real" or paint a picture of me as anything but the parts of me I've decided were good enough to share online.

I'm sorry if any of this tarnishes your opinion of me. That was never my intention.

2. I wish Gerard Butler would tweet more because then it would be easier to pseudo-stalk him. Yes, he's old enough to be my father. No, I don't care.

3. I love My Little Pony: Friendship is Magic. I will never apologize for this. I get a great many compliments on my Rainbow Dash sweater albeit mostly from people who have no idea who Rainbow Dash is.

6. Zack Morris was my first crush. When I was 10 I legitimately thought that I would marry him someday.

7. I HATE coconut. I hate everything about it - the smell, the taste, and the texture, especially the texture. Yuck.

8. Through Wrath of the Lich King I was an elitist hardcore progression raider and among the top 15 holy priests on my server. I didn't make the switch to Disc until Icecrown Citadel came out and Disc priests became such a hot commodity I had to try it. I never looked back. Now, I don't raid at all.

9. I have an obscene amount of toys - particularly stuffed animals. I know they are technically for children but I don't care. My favourite is a little pink bear that I have had since I was three years old named Rosie.

10. When I was in University I was mildly anorexic. It was never diagnosed, and I was never hospitalized, but it was there and at my lowest weight I came down to around 90 lbs and could borrow shorts from my nine year old brother. Luckily for me all it took to come back to a healthy weight was a move back home and a mum who constantly pressured me to eat, and helped me learn to enjoy eating again. I have never told anyone this, but sometimes, particularly when I'm sad, I miss it.
Posted by Unknown at 02:15 4 comments: