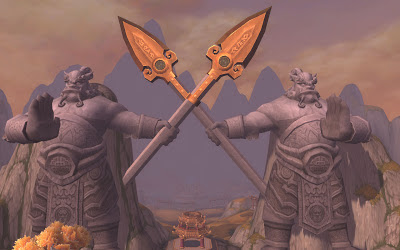 Cy got me sick.

I feel awful. I have to finish my bake sale goodies. I have to do our laundry. I have so much stuff to do and only one day off to do all of it and I'm sitting at my computer, blogging because I can't fathom getting up right now.

Day 2 - Why I decided to start blogging.

I don't think that there is any one reason why I started blogging. It's more like a culmination lots of smaller factors.

At the time when I started blogging actively WoW had become a really solitary game for me. I had just left my guild because I disagreed with the way our raid was run, and I couldn't stand the thought of being in the same place as our raid leader for one more second. So, I left and joined my fathers alt guild to get some air and make it evident to those in my previous guild that I had moved on because I was too cowardly to tell them why I left. I mean you can't bad mouth the guild leaders girlfriend and get away with it.

So, I was feeling pretty lonely. I've always noticed how tightly knit bloggers tend to be. Regardless of the subject matter bloggers always make friends with other bloggers who write about the same things. I wanted to be part of your community so, I started a blog and hoped that I could stop being an observer and become a participant.

Also, I had some things to say. I'm pretty soft spoken... actually make that I'm really soft spoken. I've never, ever held my own in a fight whether it be with fists or words. I can count on one finger the amount of times I've stood up for myself in game without Cy having to stand up for me. I wanted a forum where I could say what I wanted without having to deal with the players I was angry with and having to read the hateful things they had to say back.

Mix those in with the fact that I've always wanted to have a blog that I actually stuck to writing for regularly and you end up with me here, 4 months in to writing Holy Nova.
Posted by Unknown at 12:53