Blog Azeroth proposes a new topic for bloggers to discuss every week. This week is courtesy of Mataoka of Sugar and Blood. 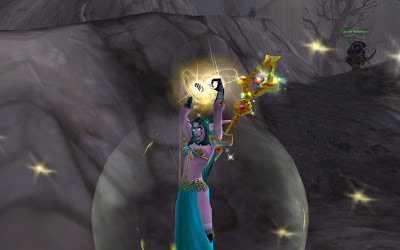 Wow, this one was so difficult for me. Not because I can't pick a favourite. That part is easy - priest. Hands down. No contest. She's my highest level character, has the most hours played (hours is less embarrassing than days or weeks), the most raid progress, and before they became account wide the largest collection of mounts, pets and achievements on my account. It's safe to say that everything I do on WoW, I do first on my priest.

It's the second part of this topic that I find hard to put into words. Why? It's hard for me to explain the attachment I feel for this particular character, and where I don't roleplay at all I don't see her as a separate entity apart from myself but rather as a part of myself. Telling you why she is my favourite requires introspection, and it's hard to tell you why I feel such an affinity for this particular character. I'm sure that part of it, probably a big part actually, is class.

I can't remember if I've talked about this here yet, but I have not always been a priest. I spent at least my first year, probably closer to two years now that I think about it in Warcraft, as a rogue. 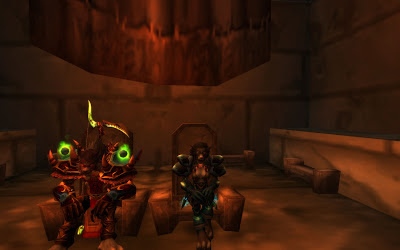 She's changed many times since I created her, but this is actually my original character currently masquerading as a worgen. I actively viewed myself as having a rogue main up until well into Burning Crusade. I had always been curious about a priest alt, but making the transition to healing from melee dps was a big step for me. It was a step I eventually made, and have never looked back, at least not for long.

Fundamentally, I feel like everyone in WoW has a class that resonates with them the most. If not a class, then at least a role. From playing her, I learned than I am a healer. More than that, I am a priest. While I have many alts, that I enjoy playing, I always come back to my priest. She has become for me something like a pair of well loved, perfectly broken in sneakers - I am most at home in Azeroth when I'm playing her.

While I'm sure that class has a great deal to do with why she is my favourite, I know that's not all there is to this. Part of it, I'm certain, is also in her name. I've gone to great lengths to preserve her original name and even when Cy moved servers I stayed behind. I cannot imagine her having any name other than Hemoglobin. It's irrational, I know but it's important to me.

In short, there is no one reason why this is the toon I idle in Stormwind on - I have characters on more active servers that would entertain me in trade much more than Staghelm does. In fact, I am logged in, idling while I write this. The words come more freely if I'm logged in idling while I write.

I'm not sure how to wrap this up... so here is an unrelated picture I drew in Marketing. 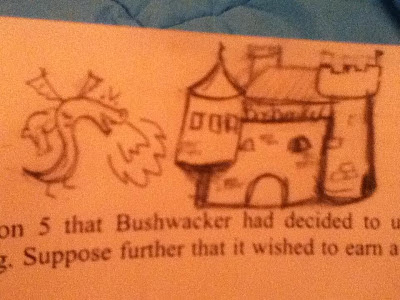 For those unfamilliar with Trogdor the Burninator you can check him out here through this link and if you like the doodle, check out my flikr, link on the right.
Posted by Unknown at 23:10