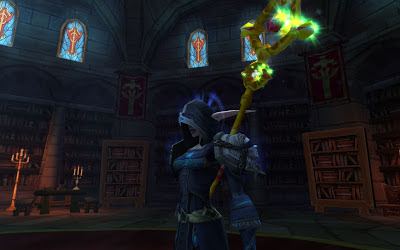 I once said that I would never be geared for heroics.

I haven't done many heroic dungeons yet, but the few I have done have surprised me. They aren't impossible. They are doable. Dare I say it, they are even fun.

Allow me to make something clear, new heroics... maybe even new max level dungeons are what puts me off of new expansions. Ever since Cataclysm hit and I couldn't heal through one group, much less a whole heroic, I've become a little bit wary of new dungeon content. I am pleasantly surprised that Blizzard learned from the travesty that was Cataclysm and did not make heroics so punishing that they were un-fun again.

That's not to say I found it easy, I have pretty much the baseline required ilevel and have an average skill level. If it was easy for me, I would have been disappointed. If I were an exceptional player, I would probably find them too easy.

I've made it through all of the dungeons I've gone through with minimal mana starvation and only one or two party member deaths which were all due to lack of attention paid to mechanics on their part and not really because of my lack of skill or mana.

I am so pleased that I can complete them without A) going holy or B) ripping my hair out in frustration. I've been reading lately that a lot of players find that Disc output is lacking (maybe it's just for raids?), but I was able to keep my group up adequately and; therefore, have no real complaints except that I still want my Divine Hymn back without going Holy. I feel a little bit lost without carrying it around in my back pocket in the event I fall behind, get stressed, and want a get out of jail free card. I'm sure that will pass though, I still have plenty of toys in my toolkit to play around with.

I still need to work on using Spirit Shell optimally, but I think that will come with time.

Also, LFD has given me decent, non-douche bag groups lately. I didn't know those existed, but am thankful, I needed a break especially after learning that I'm being forced to work both Christmas, and New Years. If I could afford to quit... Anyone want to hire a poor college student trained pastry chef?

I'm trying not to dwell on that.

I suck at not dwelling.

I would also like to draw your attention to my blog roll. It seems that it only took me two months to learn how to make one, and I'd love it if I could get suggestions for awesome blogs to put up there. Priest related, or WoW related, doesn't matter, anything that's worth a read.
Posted by Unknown at 16:41